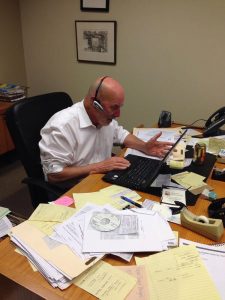 David J. Linden attended college at UC Santa Barbara where he majored in Political Science and completed a Philosophy minor. He was a member of the University’s swimming and water polo teams. After graduating from UCSB in 1964, David attended Hastings College of the Law in San Francisco.

Bechtel Corporation was Mr. Linden’s first employer. In 1971, David left Bechtel to direct a public service program for the American Bar Association in Washington, DC. For the next 9 years, Mr. Linden served as staff director for a variety of ABA programs in corrections/prison reform and mental health reform.

In 1980, David left Washington and moved to Napa and entered private law practice. Since then, he has represented applicants for government and private disability insurance benefits, employer disability claims (ERISA), and LTD insurance claims. For the first several years, David’s law practice included other areas of the law, such as family law and personal injury. In 1984, David’s wife, Cathy, began to work with him as office manager. In 1990, she encouraged him to direct all of the office’s energies to assisting people with their battle to obtain the disability insurance benefits for which they had paid. Since then David limits his practice to working with individuals who are seeking disability or SSI benefits from the Social Security Administration or long term disability (LTD) benefits from private insurers.

David is recognized by the State Bar of California as a Social Security Disability Law specialist. He served as president of the Napa County Bar Association in 2007, and was a member of the Napa County Grand Jury from 2007 to 2009.

Between them, Cathy and David have four children of whom they are proud, and lots of
grandkids. Daughter Carla has been working in the office since 2014.

Don’t Wait to Ask For Help. Reach Out Today!

All too often, people wait until after they are denied benefits to contact us. Their claims might be legitimate, but are denied due to incomplete medical and vocational information, inexpertly completed applications, or wrongheaded conclusions by their medical consultants. You can avoid these problems by reaching out to Linden and Cottrell Law in Napa, California before you file a claim. We know what documentation is required, have experience dealing with physicians to ensure that medical records submitted to SSA or private insurers are complete, and are familiar with how the court system works.